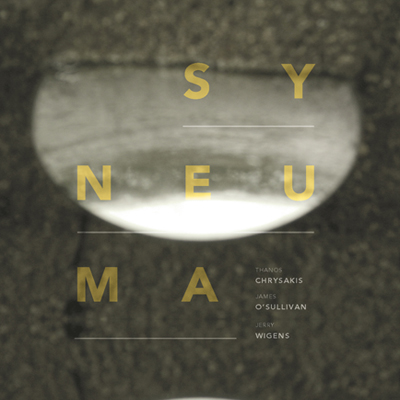 Thanos Chrysakis’ output consists of composition, performance, and installation. He was born in Athens in 1971. After residing in the UK between 1998–2014 he moved in 2015 to Belarus. 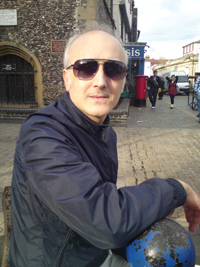 Using a combination of feedback, conventional guitar techniques and instrumental preparations, London-based musician
James O' Sullivan exploits the full sonic potential of electric guitar and amplifier, relating them meaningfully to the immediate physical environment.
​
His interest in improvisation, recording and performance has led him to record and perform across the UK and internationally, both solo and with numerous improvised music groups. More longstanding arrangements include Found Drowned, a trio with Pete Marsh and Paul May, and his collaboration with Thanos Chrysakis on several releases on the Aural Terrains imprint.

His debut solo album, 'feed back couple', was released in 2011. His second solo album, IL Y A,  is out now on the Linear Obsessional imprint. 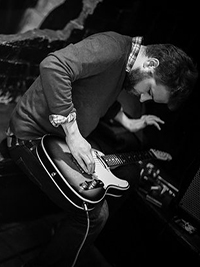 Jerry Wigens is an improviser and composer who plays guitar and clarinet. Most of his musical activity has taken place in London although he has also performed in Zurich, Geneva, Berlin and Athens. His interest in improvisation started at an early age and he attended John Stevens' workshops at the age of nineteen. Since then he has worked in various musical contexts including rock, jazz and contemporary classical and has performed with Eddie Prevost, George Lewis, Sylvia Hallett and Walter Cardew, among many others. He has also had work performed by guitarist Alan Thomas and contemporary ensemble Vamos. He has studied with Roger Redgate and participates in Eddie Prévost's workshop sessions which he has occasionally convened in Prévost's absence. He also plays guitar in prog/improv band Astrakan. 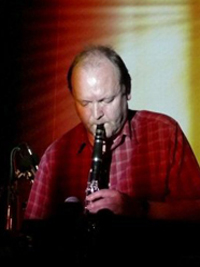 The trio of Thanos Chrysakis on piano and vibraphone, guitarist James O'Sullivan and Jerry Wigens on clarinets have considerable experience of playing together, first recording between 2007 and 2008 as part of the quintet that released Instant-Cascade-Distant (Aural Terrains, 2009) — on the label for which Chrysakis is artistic director and on which most of his music has been issued. The Athens-born pianist and composer is now resident in London, where O'Sullivan and Wigens have been active for some years as improvisers, notably as regular members of the weekly improvising Workshop run by AMM drummer Eddie Prevost. O'Sullivan attracted attention with the release of his fine solo album Feed Back Couple (Forwind, 2011) and his work in the innovative songs-plus-improv quartet Clang Sayne. In addition to clarinet, Wigens plays guitar in a range of settings, his experience dating back to the mid-seventies when he attended drummer John Stevens' Workshop.

Their trio album Syneuma was largely recorded in July 2011, with one track from 2010. It is an interesting companion to that 2009 album and to Magnetic River (Aural Terrains, 2012), the latter featuring Chrysakis, O'Sullivan and Wigens, joined in a sextet by the saxophones of Sebastien Branche, Tom Soloveitzik and Artur Vidal. Comparisons between the three albums reveal much about the ways in which improvisers play differently as the context changes. As a threesome, Chrysakis, O'Sullivan and Wigens are outgoing and fluent, interacting well with each other... but not always sounding like a trio of equals. On the first track, Chrysakis dominates, playing for the majority of the time; maybe his being in charge of the record label inhibited the other two? He is easy to listen to as he reels off a fluent piano solo with ease. But the results sound like a piano trio of soloist plus support, dominated by Chrysakis, with guitar and clarinet contributing accompanying sounds rather than getting their own solo spaces.

As the album proceeds, things become rather more equal with greater three-way interaction and sharing of the limelight. On the second track, O'Sullivan's distinctive percussive playing on the guitar features prominently, as does Wigens' wailing clarinet — welcome sounds alone or together. However, on the third track, the piano dominates again, crowding out the others; as before, it seems a waste not to afford the guitar and clarinet more space and time. Thankfully, next up is the 2010 track, a duo feature for O'Sullivan and Wigens. It is the track here which most typifies empathetic improvisation, with the pair locking onto each other's playing and revelling in their interplay as they share and trade sounds. Fittingly, the track ends with the sound of the musicians' laughter. All ends well on the brief final track as the three reunite, with Chrysakis on vibes not piano, meaning he is less dominant. It closes an intriguing album which demonstrates that fine balance between players which makes for good improvisation. Well worth hearing.